Skip to content
One of the common things I hear from many new guitar students is how difficult practice is in the beginning, and how hard ongoing practice can be both mentally and physically.
While this is true, I wanted to bring to your awareness that there are different types of practice for different things, and that having an awareness of many different practice strategies can greatly aid us in our effort to become better guitar players.
By definition practice is the repetition of an activity with the intention of improving it. If we want to get better at something, we need to practice it. There is no getting around that.
But working harder isn’t always the best thing to do and can even lead to unnecessary burnout and unwanted frustration. If we work smarter (while still working hard)  we can get a lot more out of our practice and get a lot further along in proportion to the time and effort we are putting in.
In this article We’ll look at the Three Phases Of Practicing and even head back to the garden and touch on a real story to help drive the metaphor home.
Let’s start with our story…

Our Very Own Private Jungle

During the recent lockdown we moved back into a property which had been rented out to tenants.
Needless to say the tenants had not done a good job of maintaining the property.
There were a few things they hadn’t done, but the most impressive was the backyard.
I mean it was so poorly maintained I was impressed at how out of control it had become.
The grass was knee high, and the smaller weeds were above my waist. There were even a few thistles that were taller than me and I’m over 6 foot tall.
On top of that you couldn’t actually tell where the lawn ended and the garden beds began. It was just one big mess that looked like the amazon jungle.
One of the first weekends after the move I took upon myself the daunting task of getting it cleaned up.
I fired up our lawnmower and pushed it onto the grass only to have it immediately choke out.
I fired it up again, rolled it forward a few inches and again it choked out.
I repeated this for about 20 minutes and mowed a total of 40cm before giving up.
If you’ve read my article about not giving up guitar and quitting too early then you’ll know that you should always seek an expert before giving up.
So I called a gardener to come and give us a quote.
The gardener arrived, took one look at the amazon jungle we had growing out the back and shit his pants. He told us it was too big a job for him and got in his car and quickly drove off, nervously looking over his shoulder several times as he drove off into the distance.
The second guy arrived and quoted us almost $2000 and 3 weekends to get in under control.
The third guy (Good Old Jim) quoted us a much better price but said it was a big job and would require some help.
In the end it took three people a whole weekend to get the garden back under control which was a huge initial investment of time and effort, but it was done, and we now had a livable backyard and could walk around without fear of getting eaten by giant snakes or getting lost for days at a time.
Jokes aside, after the initial cleanup it only takes us 5 minutes to mow the front yard and less than 10 minutes to mow the backyard which we do once a month.
We still pull out the occasional weed as well, but our garden is at the point where we only need to put in a little bit of effort every now and then to keep it maintained.
We had one big initial investment of time + energy which was really really daunting at first, but once the hard part was over and done with we can now put in the bare minimum of effort to keep it in order.

So how does all this relate to guitar?

Whenever you are learning something new, it’s often daunting and takes a whole lot of effort and brain power to get on top of.
Then once you understand it, you need to invest more time into building up the skill. You might even hit the wall and feel like giving up, but once you push through that point and have a breakthrough the practicing will be much easier and you won’t have to put in as much effort.
Congratulations, you can now enter maintenance mode, where you routinely come back and practice the item in order to retain it in your memory or keep it at a certain level of proficiency. Rather than put lots of time into it, you put in the bare minimum you need to keep it at the right level so that you can recall it when needed.
When you’re in maintenance mode, life is easy, and guitar playing is fun. Then you go and reallocate that time into the next skill or concept that needs attention.
Let’s take a more in depth look at the Three Phases of Practicing with a few examples chucked in to boot.

The Three Phases Of Learning Guitar

When you are first learning something, a lot of your attention needs to go into actually learning and retaining information about what you need to do. This learning phase is often the most mentally overwhelming because it requires brainpower to take in teh new information as well as effort to practice.
This is often the hardest because you’re learning and practicing at the same time, and when you don’t quite have a solid grasp of the concept, your attention is divided between retaining the information and implementing it in your playing.
Eventually once the penny drops and you don’t have to think about the information side of things, you can more easily move into practicing.
Think back to when you first learned chords. There was lots of mental effort involved in simply comprehending how to read the chord charts, where to put your fingers,  and the names of the chords, which made trying to play them really really hard.
Fast forward a few weeks, once you remember the names and the finger positions required for each chord, you have a much easier time of actually practicing them because your focus is less about the individual information about each chord, and more about improving your technique.
Think learning how to do a new exercise at the gym and how cautious you are at first compared to a few weeks later when you’re comfortable with it.
The third type of practice is something that I call maintenance mode practice. This is where you understand the topic well, have already invested plenty of time into developing the skill or techniques to a high level of proficiency and can then allocate the bare minimum of time into maintaining your skill level or grasp of the knowledge.
This kind of practice is useful when you already know something well, but don’t want to forget it, or can already perform to a high standard, but need to keep your chops at a high level.
The lifecycle of your guitar practice when applied to learning the fretboard, might be as follows:

You have to spend a whole practice session learning the musical alphabet and how the notes are arranged across the strings. You play each string 3 times forwards and 3 times backwards to make it stick, it takes a long time and is a little bit daunting or frustrating.

You now understand the concept and are actively working to improve it. You no longer have to spend 30 minus every session reviewing the information and trying to make it stick, you spend 10 minutes practicing the exercise. In fact, it only takes you 1 minute to do the first two strings because you know them so well, and about 2-3 minutes each for the other strings.

In the Improvement Phase you keep working at something session after session with the attention of improving it. Sometimes it will be easy, and other times it will be hard, stick with it.

After a couple of weeks of memorising the strings you will notice that you can get through each one in a matter of seconds, and that doing things three times is rather mundane & unnecessary.

If you reached this point then Congratulations, you have entered the Maintenance Phase. This is where it is more beneficial for you to reduce your practice time from say 10 minutes down to 2 minutes so that you are running through things enough times to ensure you retain them in memory or skill, but don’t waste time playing over things for no additional benefit.

The Maintenance Phase & Beyond

At this point you can either reduce the amount of time you put into practicing something and reallocate it to something in the Learning or Improvement Phases, or find a more difficult level of the task at hand to further your knowledge in the area. (Think playing up and down the string using a more difficult pattern to challenge yourself and further consolidate your knowledge).
As you learn more and more things, you will have to invest a larger chunk of time and brainpower into learning them (The Learning Phase), and a lot of effort into developing your skills (The Improvement Phase) but eventually as things get easier and easier you practice them less and put more time into other practice items which need the attention (The Maintenance Phase). You will gradually have more and more things in Maintenance Phase over time which you touch base with less frequently so that you don’t forget them or have your skills go backwards. It eventually becomes a juggling act which you can better learn how to manage with a Rotating Guitar Practice Plan which is a topic for another time.

Hopefully after reading this you have a better understanding of how the three phases of guitar practice work and can adapt them into your practice routine. Doing so will allow you to take the right mindset to each phase and apply the right amount of time and effort to the skills and concepts you are trying to learn and improve. Doing so will make practice much more enjoyable and seem a whole lot less daunting. 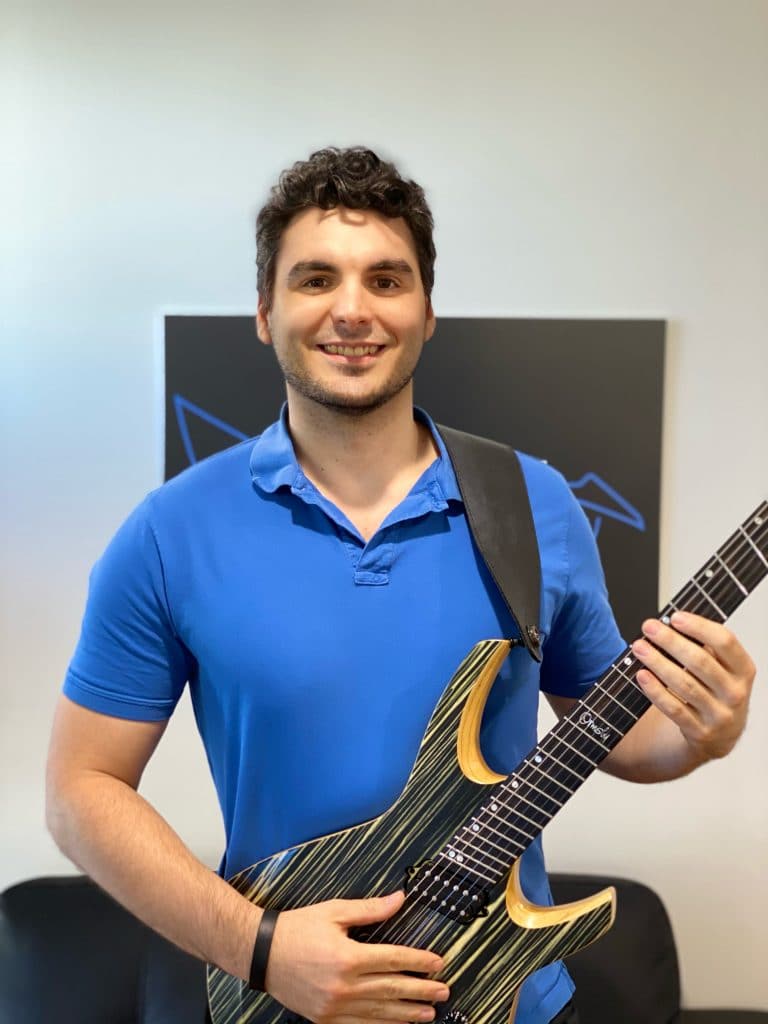 When he isn’t adventuring deep in the heart of the Wantirna South Jungle Michael Gumley is teaching the best guitar lessons in Melbourne Eastern Suburbs from his home studio in Wantirna South.

Michael has the personal mission of raising the standard of musical education worldwide and hopes to do so one student at a time with enlightening articles that offer deep insights into the psychology of learning and the art of practicing.

If you’re struggling to make progress on guitar consider booking a FREE guitar lesson with Michael so that he can share with you some effective practice strategies to help you move forward.

Visit the Melbourne Guitar Academy main page to book a free guitar lesson in person or live on Zoom.