If you are aiming to be a great guitar player, a solo guitarist, or even start writing your own licks, learning the guitar chords is a vital first step. Using chords while playing your guitar or essentially playing a solo means you play both practically and theoretically. “Chord” refers to a combination of three or more notes played together by strumming your guitar strings. Reading the below, you’ll see that playing lead harmony over chords is crucial than you may realize.

How will learning chords help you?

-To understand the songs better

-To improvise the music

-And also to compose your own songs/solos

Soloing is a direct spotlight moment, and there are certain lead techniques and theories to follow in order to capture the attention of the audience leaving an everlasting impression.

Scales & chords are built from tones & intervals. By knowing the intervals, you can balance the chord with a scale that uses the same tones. Before we head to the theory, let me start by listing you down a few important tips that may come in handy when you work hard towards mastering your solo skills.

Solo is a musical conversation. During a conversation, you don’t usually barge in and start a whole different topic all of a sudden, and even if you do, the chances are that it would be a distraction to the actual topic breaking the concentration of the listeners. Soloing is somewhat the same. You need a good structure for your solo. For which, before anything else, you need to identify a root/bass note to establish the key of your solo. This is defined by the root note of that chord, which in turn becomes the root note of any scale you might use. It’s also called the “bass note” and is often the lowest note in the chord, commonly the low E, A, or D string on your guitar.

Your solo can be made more interesting by adding sufficient intervals. Pausing here and there will give the audience a break to capture it better. Don’t fear the silence in between.

A recurring theme will help you to tie everything in your solo and whole performance together, giving it a cohesive feel.

You should be changing your notes in your solo to match the chords in your song.

The base of your soloing techniques consists of bends, legato, speed, timing, etc. The easiest way to play your guitar solo using chords and over chord changes is by visualizing the chord progression in the form of chord shapes.

Let’s start by using the E and A form barre chord shapes; 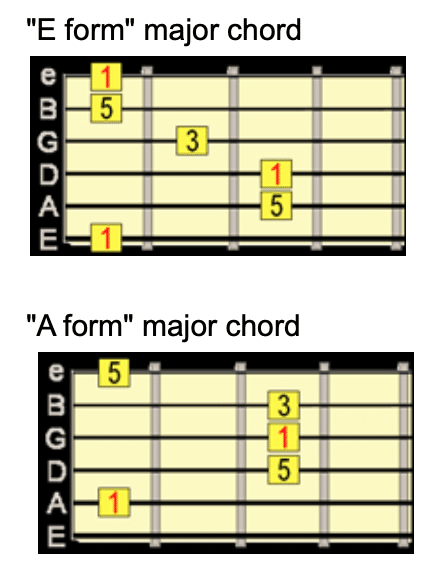 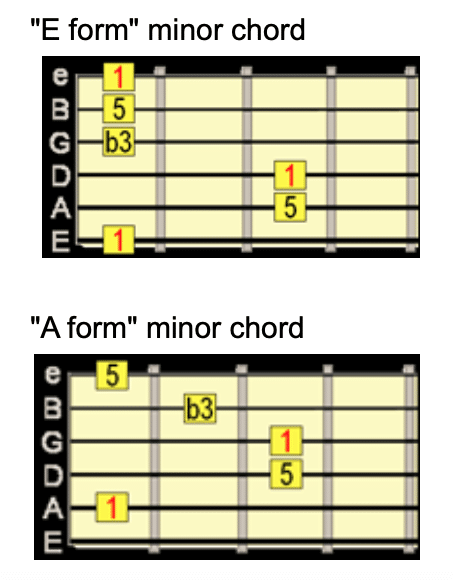 You should be confident in the major and minor triads in any key. Locate each chord in the progression.

Note:  When selecting your chord shapes, try and choose the ones that are close to the previous and next chords. 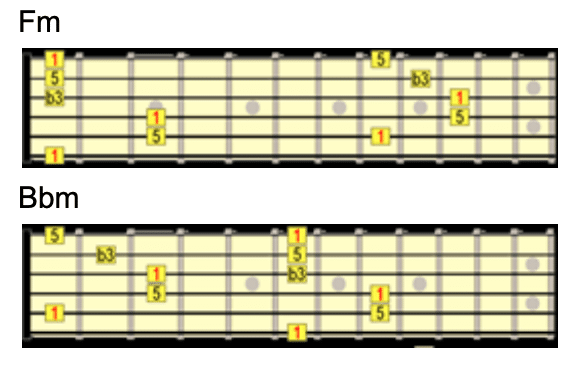 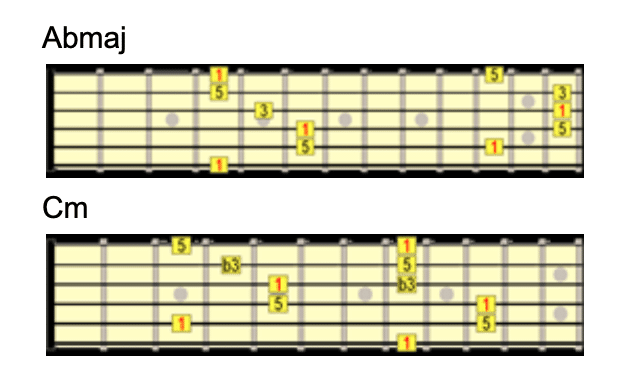 Once you have successfully identified your chord shapes/tones, you may start playing chords in progression one chord tone at a time.

Use the same process, find the chord tones using E and A chord shapes, and continue playing through one note per chord. If you know your notes across the fretboard and the basics, this wouldn’t be complicated.

It’s highly recommended that you stick to the basics and practice until you remember the shapes and you can conveniently distinguish the tones and chord progressions, before moving on to any of the chord extensions (advanced level).

A good solo contains tension & resolution. During your solo play, there could be a lot of tension that gets resolved to achieve the final resolution at the end. The strongest resolution of all is created by playing the root of the key over the key-chord.

Pentatonic scales are about the easiest scales to learn and are very versatile. They come in two tonalities; Minor & Major.

Using the Pentatonic scale to solo over a song;

The root on the Pentatonic minor scale is the first note on the 6th string.

You can choose your favorite songs to solo over, using the easy Pentatonic scale and practice over and over again. This is not only fun, but it will also practice your hands and mind to the chord shapes and patterns and will make you start performing already. Along the way, you can start learning other patterns and extensions as well, and don’t forget to record your progress at each step. Eventually, before too long, you will start surprising yourself with amazing soloing skills in you which you are starting to master from now onwards.