Skip to content
How Do I Know If My Child Is Able To Learn Guitar?

How do I know if my child is able to learn to play the guitar?

A lot of parents worry that their child might not be talented or gifted enough to play guitar. Perhaps because they don’t play an instrument themselves and think their child may have inherited the same abilities.

I’m here to answer a few questions that parents ask regarding this.

Does talent matter when it comes to learning the guitar?

Besides parents worrying about their own children, a lot of adults actually have the same insecurities about whether they are able to play the guitar the way they want to.

Whether talent exists or not, talent is not the defining factor of how far your child can go with learning to play the guitar.

I want to raise an example of an individual that many have named one of the most talented young musician ever produced. Mozart.

Mozart was born and consumed by music since the moment he was born. From the age of four, he begged for his father to teach him piano because his sister had been playing already. This was this way of gaining affection from his father who is a music instructor.

In two short years, he had already started touring with his sister. 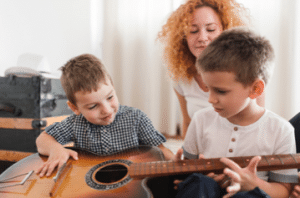 And while he was young when he started composing, many pieces had the help of his father. It wasn’t for a good ten years of hard work and tens of thousands of hours of playing and composing that he started to produce great work.

But I can’t offer the same support to my child?

If you would like your child to be a Mozart prodigy, then yes you would probably have had to support them day in day out for ten years from a young age to create anything similar to Mozart. 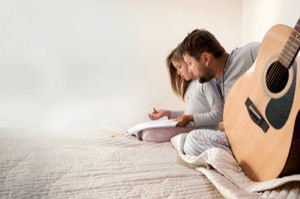 However, it depends on what your goal is for them. If you would like them to enjoy playing the guitar and achieve their best version of themselves. Then the best thing you can do is support them in the best way you are able to.

Whether that means, even when you are tired, sitting with them to help them practise guitar.

Or being the warm body so that they have someone to perform to.

There are lots of different ways parents can show their support to their child when it comes to them learning to play the guitar.

What else can I do for my child?

Keep telling them that you are proud of the effort that they are putting in and rewarding the hard work they put in. This makes sure that they are happiest when you congratulate them for working hard. So that they start to enjoy the process of learning to play the guitar. Rather than any individual achievement.

If you enjoy the process of learning guitar, then there is no end to how far they can go.

About Guitar Tuition East London, they are a guitar school providing kids guitar lessons in London that believes every child has the potential to learn to play the guitar. And want to support them and their parents for the kids to have lots of fun and an engaging experience.